Looking at the ways people have fun can tell us a lot about their everyday lives. How did people in the past spend their free time?

With the 19th century came the rise of sporting culture and an emphasis on the education of young people.

Children were especially encouraged to play with toys and games that helped them to learn: puzzles with maps of the world, ball and cup games to improve hand-eye coordination, and dolls that were thought to teach young girls how to be mothers. 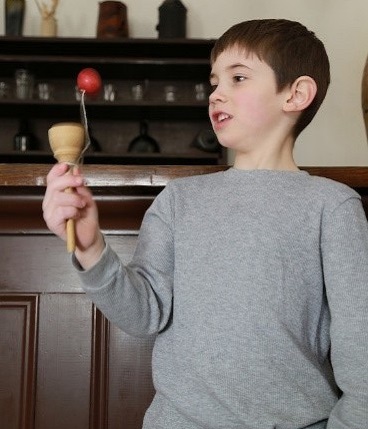 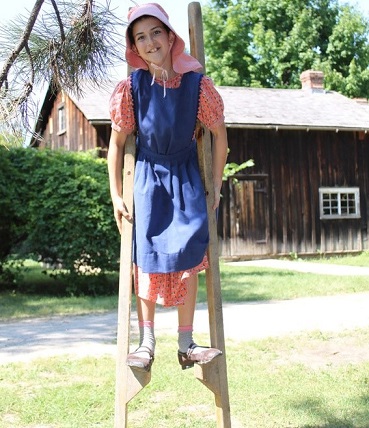 Visitors to the Village playing with ball and cup (left) and stilts (right).

In the early years of the 1800s, most toys and games were homemade. Children were expected to contribute to their families by doing chores, and many learned trades skills at a young age. Children were considered small adults, and there was not a lot of time for play!

By the mid 19th century, however, much was changing for children. The idea of childhood as a separate and special stage of life developed, and play time came to be seen as important.

Sports teams were viewed as a means of keeping young men busy, and imparting the values of honour, fair play and masculinity. Elaborate rules and handbooks were developed to reinforce these values.

What do the games and sports described below tell us about people who lived in the 19th century?

Parlour games were very popular in the 19th century. They weren’t just played for fun — like toys, they were meant to be educational, and could be quite challenging!

Popular games involved exercising the brain for memory and recall, spelling, and dexterity, and for the abilities to think and act quickly.

TRY THE FOLLOWING GAMES AND ANSWER THE QUESTIONS:

The Twister Twisting
When a twister twisting would twist him a twist,
For twisting his twist three twists he will twist;
But if one of the twists untwists from the twist,
The twist untwisting untwists the twist.

CAN YOU SOLVE THE RIDDLE?

I’m a singular creature, pray tell me my name;
I partake of my countrymen’s glory and fame;
I daily am old, and I daily am new;
I am praised, I am blamed; I am false, I am true;
I’m the talk of the nation while I’m in my prime,
But forgotten once I’ve outlasted my time.
In the morning no Miss is more courted than I;
In the evening you see me thrown carelessly by;
Take warning, ye fair — I like you have my day;
But alas! — you like me must grow old and decay.

Highlight the text box to reveal the answer!

(This game can be adapted to play virtually!)

This game aids in language skills and memory. Sit in a circle. Choose one person to begin the game. Participant one begins with the letter A and must fill in the following sentence with words that begin with that letter: “I am travelling to ——- and I will take a ——– and a ——-.” (Example: “I am travelling to Arizona and I will take an apple and an awl).

Participant two then fills in the sentence with words beginning with the letter B. The game goes on until one of the participants cannot fill in their sentence.

Check out these books for more Victorian puzzles and games:

A number of sports were popular in the 19th century. Different communities living in Canada have contributed to the popularity of sports in the past and today.

Read the descriptions and look at the photos of the sports below.

BASEBALL
Baseball was being played in Canada as early as the 1830s. By the 1860s it had become the most popular sport in Ontario!

Baseball was played by farmers, artisans, and people considered part of the middle class. Unlike many other sports of the time, baseball had its roots in North America and not Europe.

Baseball was a social event, and residents of communities would come out to cheer for their local team. In cities, baseball became increasingly organized, with clubs and professional teams. By 1867 the city of Hamilton had 17 different baseball clubs!

Many did not agree with the idea of baseball players being paid: it was thought to take away from a community’s pride in its own team. As paid professional teams became prevalent in the late 1800s, baseball in rural communities declined in popularity.

CROQUET
The beginnings of croquet are unclear, but many believe it comes from paille maille, a French game in which players used clubs to knock a ball through bent willow branches.

The game migrated to England, where it was called pele mele, then pall mall; the hoops were made of wire, often decorated with flowers, and the mallet was a long club not unlike a hockey stick. Some believe that pall mall is linked more to golf than croquet.

In the mid-19th century an almost identical game traveled from Ireland under the name crooky. People loved it, and by 1865 it was widely played throughout the British empire, migrating eventually to Canada and the United States.

The game would often be played at family gatherings, picnics, and garden parties. Women and children were allowed to participate.

CRICKET
Cricket was played in the early days of the 1800s, mostly by army officers and other members of the upper class.

It was considered a sport of the elite: matches would often go on for several days, making it difficult for most farmers and trades people to participate.

In North America, cricket was mainly popular among people of English background. As immigration from other parts of Europe increased, the popularity of cricket began to decline, and people became interested in other sports and games.

Today, cricket is making a comeback in Canada. Why do you think that is?

LACROSSE
Lacrosse has one of the longest histories of any organized sport in North America. Stick-and-ball games similar to lacrosse have been played in what is now Ontario by both Algonquian and Iroquoian Indigenous groups since at least the 1600s, and likely for much longer. As early as 1637, Jesuit missionary Jean de Brebeuf wrote about entire villages near modern Midland playing a stick-and-ball game he called “crosse”.

Today, the Ojibwe “baggataway” and the Mohawk “tewaarathon” are considered the most likely Indigenous ancestors to modern lacrosse. Both names are sometimes translated as “the Creator’s Game”, highlighting the deep cultural and spiritual importance the activity held for its original players.

In the 1870s lacrosse became popular among those of European background. Most players were young, Canadian-born men. It was considered a game that made boys into men — although the original roots of the game tended to be ignored.

HOCKEY
Hockey is thought to have developed from older ball-and-stick games like bandy, shinty, Irish hurling, and field hockey.

Many cities in Canada claim to be the birthplace of hockey, but no one knows for sure!

Originally, hockey was mostly played outdoors. Snowbanks would be boards, and wooden posts were the goals.

Hockey’s popularity did not take off until the late 1800s. The first organized game was played in Montreal in 1875, and the first professional league began in Ontario in 1908.

SNOW SHOEING
Snow shoes were invented by Indigenous people for winter travel, and then adapted for sport by Europeans!

Snow shoeing clubs began in the 1820s and 1830s. The early clubs tended to include members of the well-off. Snow shoeing excursions could last for an entire day, excluding those who needed to work.

People of the Huron-Wendat nation continued to supply snow shoes for a number of clubs throughout the 19th century.

Snow shoeing was most popular between 1870 and 1890. As club membership grew, some even began to allow women.

Many of the sports and games that we enjoy today got their start in the 19th century!

Skating clubs began in the early 1800s, organized by stationed army officers, and quickly grew in popularity. Montreal’s Victoria Skating Rink, opened on December 24, 1862, was one of the first and largest indoor skating rinks in the world. In 1887, it became the first building in Canada to be electrified.

Skating was one of the few physical activities in which women could participate. Do you think this was fair?

Other sports were introduced here in the 1800s, but did not gain widespread popularity until the early 20th century. Cross country skiing was brought to Canada by Scandinavian immigrants. Golf and curling were mostly played by the Scottish.

Explore the history of sports fashion through our online exhibit. 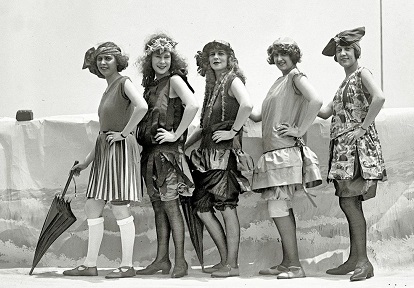