Beginning in the early 1800s, the pursuit of leisure led to an increasing love of athletic recreation.

Sporting activities initially were performed in clothes designed to resembled the latest fashions of the day, while allowing for freer movement. However, by 1900 sports were developing into organized competitive activities, and special sport-specific uniforms began to be created.

By the 1920s, high fashion had begun borrowing ideas from athletic clothing. This would lead, eventually, to the creation of the modern sportswear industry.

This online exhibit is based upon a gallery exhibit created in collaboration with the Fashion History Museum in Cambridge, Ontario, and displayed at Black Creek Pioneer Village’s McNair Gallery.

As walking became an increasingly popular form of exercise in the early 1800s, women needed a costume that allowed freer movement.

American dress reformer Amelia Bloomer originally promoted the idea of wearing trousers under short skirts in the 1840s. Although her style failed to catch on as a fashionable garment, women’s trousers became known as “bloomers” and were often worn for a variety of sporting activities.

Calisthenics were promoted as an appropriate exercise by girls’ schools and women’s associations such as the Y.W.C.A. Basketball was also considered a suitable game for schoolgirls when it was included in many gymnastic programs in the early 1900s.

By that time the most common gym costume consisted of bloomers and a nautically inspired tunic called a “middy”.

By the 1860s, the introduction of rubber-soled shoes and lawn mowers to create evenly shorn lawns helped to make croquet, badminton, and tennis popular lawn games.

Despite the strenuous nature of the game, lawn tennis was played in fashionable dress until the 1920s, although buttoned vents on skirts allowed for better movement.

Tennis became an Olympic sport in 1896, and the first women’s tournament was held in 1900. The first female gold medalist for tennis was Charlotte Cooper of Great Britain, who was also a former Wimbledon champion.

Golfing became a popular women’s sport in the 1890s, and like tennis was initially played in fashionable dress.

In the 1920s, many women began to wear outfits for playing golf that closely resembled men’s golfing togs, including knickers and argyle socks.

Sea or lake bathing has been a popular way to cool off during hot summer weather since the mid-1800s.

Early swim classes were intended primarily to teach a skill needed to avoid drowning in boating accidents. Swimming only gained acceptance as a sport in the early 1900s, as swimming pools became popular.

Until the early 1900s, most beaches segregated men from women. As more beaches were opened to mixed bathing, the design of bathing dresses began to emphasize sex appeal over utility.

By the early 1920s, beachside beauty pageants were becoming a common sight at many summer resorts, which meant that bathing dresses often were designed more for posing than swimming.

Sport was originally a man’s domain, based on activities needed for the art of war: wrestling, boxing, fencing, archery, shooting, and riding. Ladies took up riding for exercise in the 1700s and adapted a suit with a jacket tailored to imitate men’s riding wear.

However, while men sat astride the horse, until the early 1900s a lady was expected to sit sidesaddle with a long skirt covering her legs. 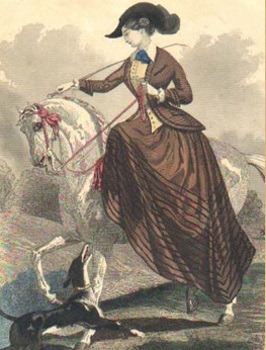 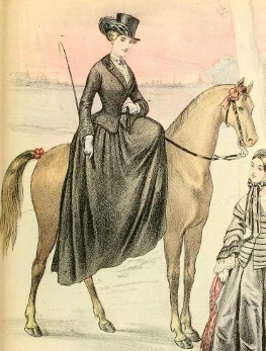 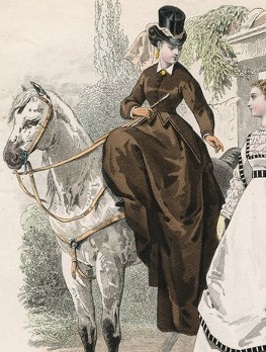 Jodhpurs were originally a style of Indian pant borrowed by the English cavalry. By 1910, women were wearing jodhpurs for astride horseback riding and other recreational activities.

Bicycling became a massively popular activity for women in the 1890s. A suit style was worn for the sport that included a shorter skirt, bloomers, or a bifurcated trouser-skirt to keep the hem from becoming entangled in the chain.

The central bar of the bicycle’s frame was set lower on ladies’ bikes to accommodate skirts. 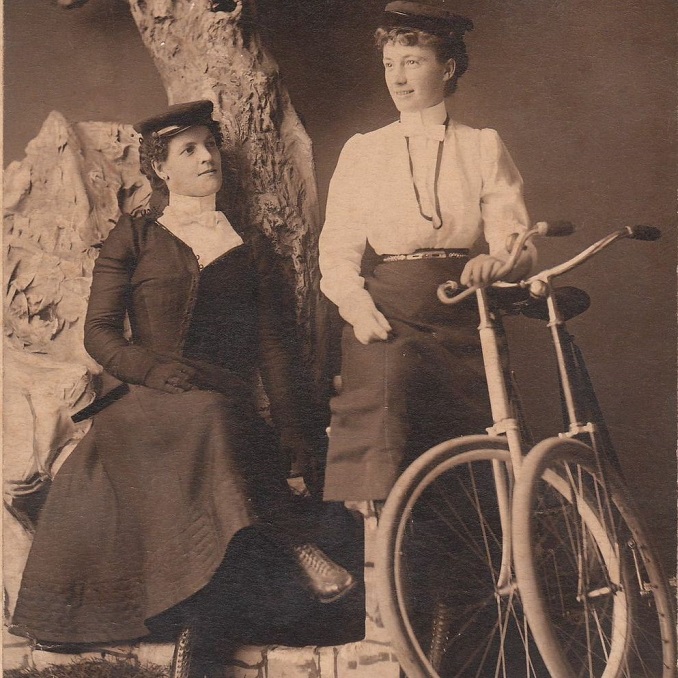 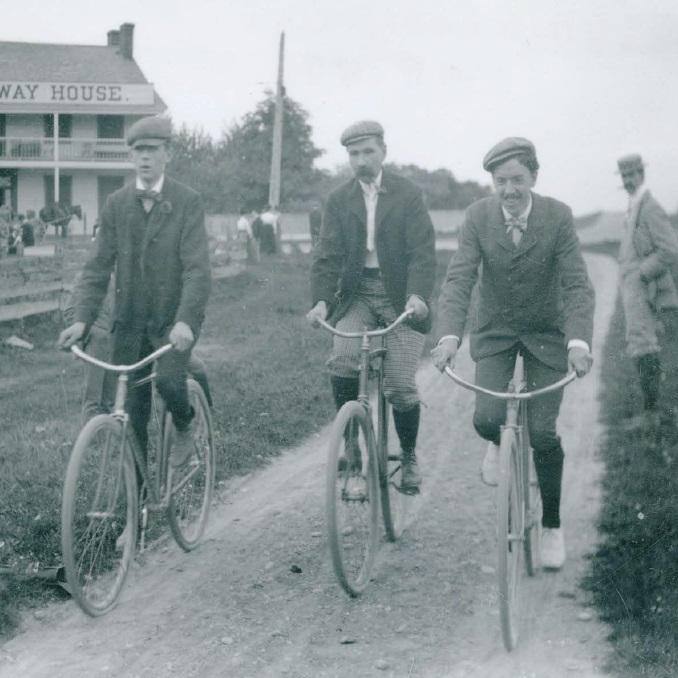 Skating had been a fashionable pastime in Europe since the 1600s. For most Canadians, wintertime provided more opportunities for sporting activities than summer, and icy ponds became the perfect setting for a variety of stick and ball games.

By the late 1800s, curling and hockey had become popular games played across Canada by both men and women. 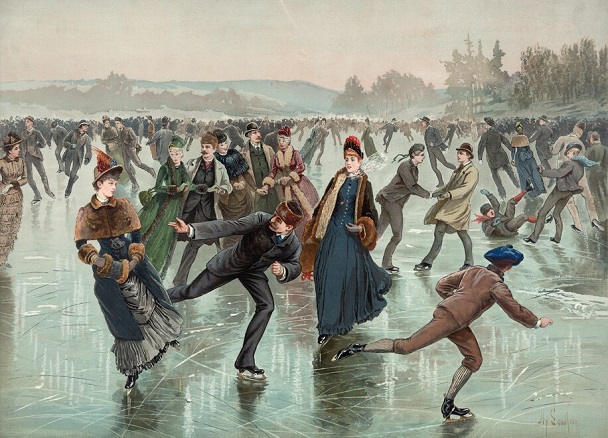 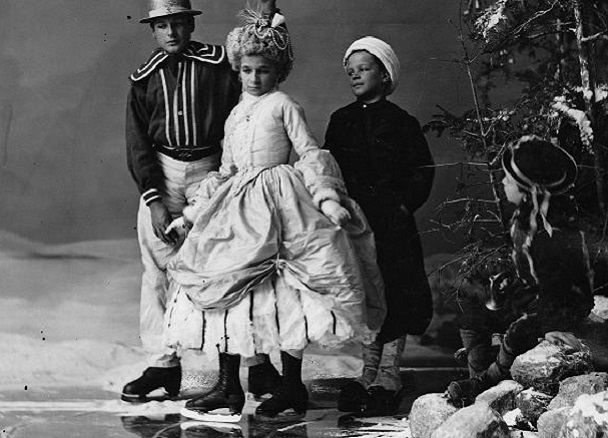 In the late 1850s, a short-striped petticoat called a “Balmoral” (in honour of Queen Victoria’s Scottish estate) was popularly worn for skating.

Originally, the Balmoral petticoat was only revealed when the longer overskirt was pulled up. But by the 1890s, the Balmoral had become an outerskirt. 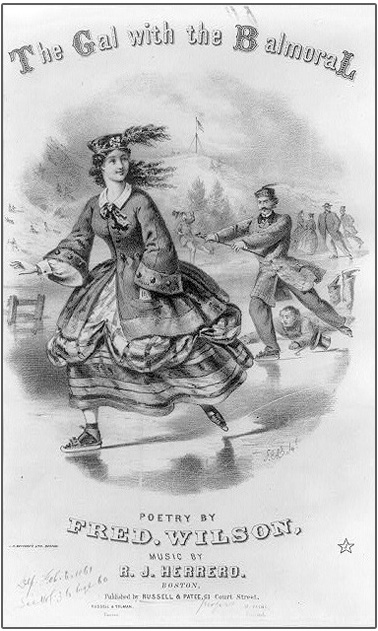 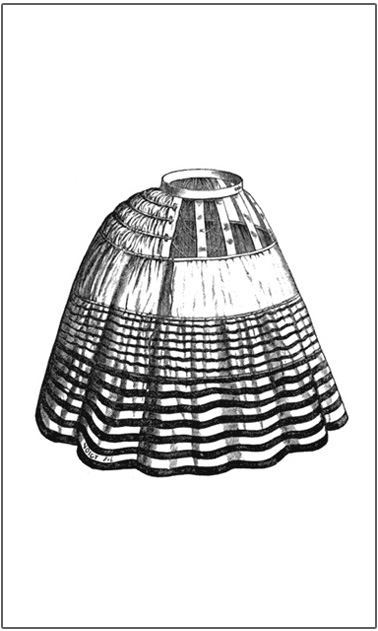 Above left: “The Gal with the Balmoral”, lithograph, 1861, Library of Congress.
Above right: Balmoral design featured in Godey’s Lady’s Book, 1858.

The Balmoral design pictured above combines both a hoop and coloured skirt like that adopted by Queen Victoria. The woolen material is red and black in graduated stripes, reflecting a “peasant” flair.

Snow shoeing was developed by Indigenous peoples for hunting during the winter, and was adopted by early Canadian fur trappers. 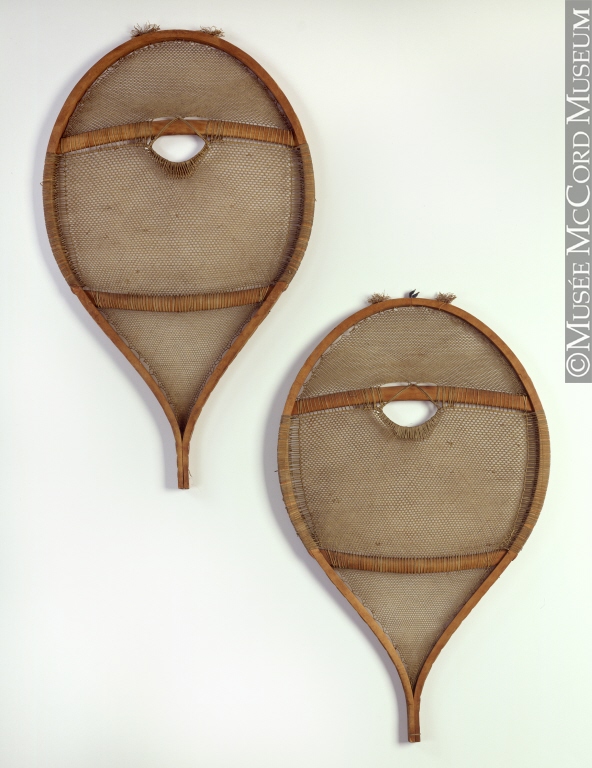 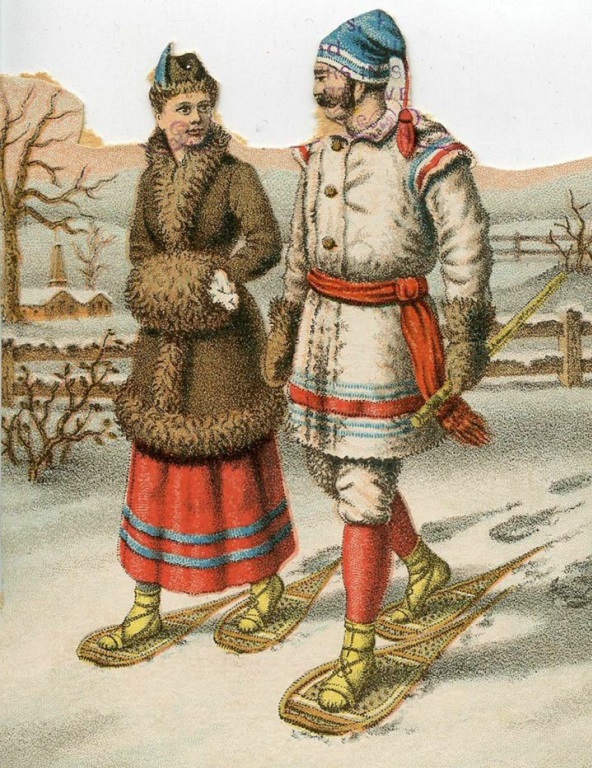 Skiing originated in Scandinavia and had become popular across Europe by 1900. However, the sport was slow to catch on in Canada.

The earliest Canadian ski clubs were formed in western Canada. By the early 1930s clubs were operating across the country.

Initially, winter outfits usually worn for snowshoeing and tobogganing were adopted for skiing. Unfortunately the fulled wool allowed wind to penetrate and snow to stick to the fuzzy surface. Materials with smoother finishes and tighter weaves would later be used to design clothes better suited for skiwear. 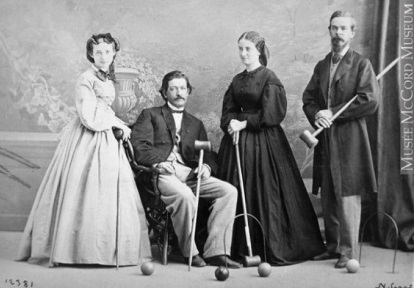