Herbs have long been valued for their usefulness. With so many applications — medicinal, culinary, aromatic, and more — no 19th-century garden was considered complete without a variety of these versatile plants!

Chives, sage, lavender, sweet basil, lemon balm, thyme, savory, and peppermint — these were the herbs most often found outside the kitchen door of homes in Ontario. Hence the term “door-yard” gardens!

The useful properties of herbs were discovered centuries ago, by observing what parts of certain plants would be eaten by sick animals.

Archaeological research has shown that humans were using herbs tens of thousands of years ago, mainly to hide their scent while hunting.

Indigenous peoples in what is now Canada collectively used more than 1,000 different plants for food, medicine, and materials, as well as in cultural rituals and mythology.

Many of these traditional uses of plants have been incorporated into modern life.

The ancient Greeks also used herbs to treat various diseases, and passed along this knowledge in a book called De Materia Medica, written in 50-70 CE by Pedanius Dioscorides, a Greek physician serving in the Roman army.

This book was read for 1,500 years until a revised version emerged during the Renaissance. It contains information about approximately 600 different herbs, and more than 1,000 remedies.

With the rise of Christianity, the knowledge of herbs’ usefulness was diminished by the Church. However, monks helped to gather information and continued to spread the word about medicinal herbs, and monastic herb gardens flourished in the Middle Ages.

In the 16th century, early European settlers to North America were impressed with the therapeutic knowledge of Indigenous peoples, who were versed in the wide diversity of plant uses.

The cultivation of herbs spread among the settlers, and different forms of herb gardens began to emerge.

By the 18th and 19th century, herbs had become part of the home “kitchen” or “door-yard” garden.

Although herb gardens are planted primarily for their usefulness rather than their visual appeal, there is still an aesthetic element to the design.

Smaller “herber” gardens in the 13th century were places of beauty. It was often recommended that the lawn at the centre of the garden be surrounded by borders of sweet-smelling herbs, like basil and sage.

These “herber” gardens had an intimate quality that we still associate with modern herb gardens.

Arranging the beds in a simple grid pattern allows for easy access to cultivate and harvest herbs and to rotate short-lived crops and annuals. It combines form and function in a way that is also visually pleasing! 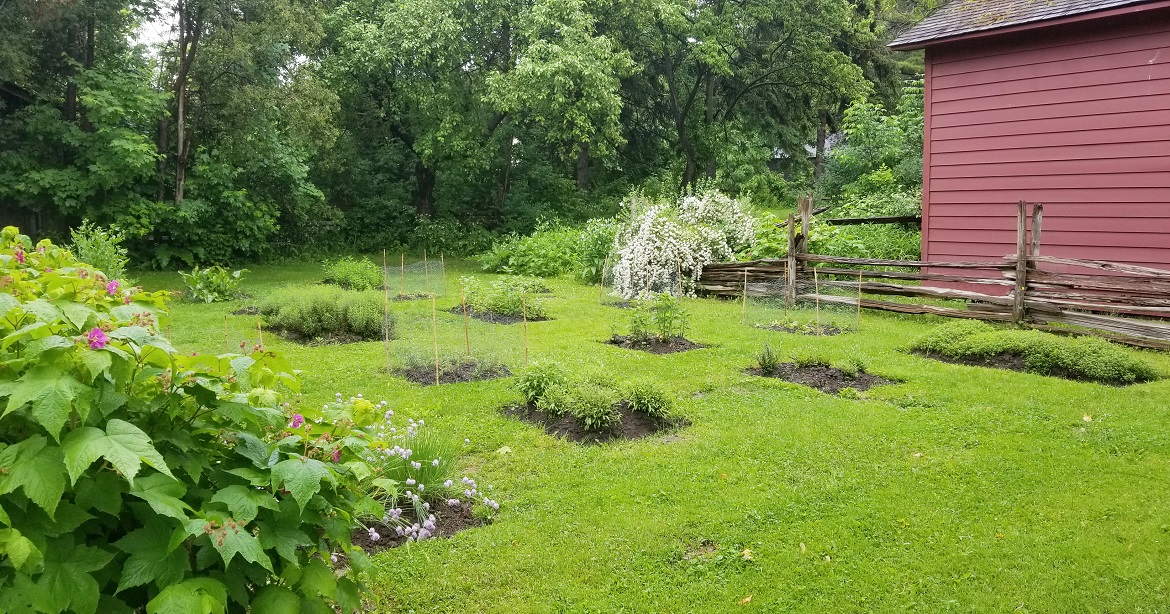 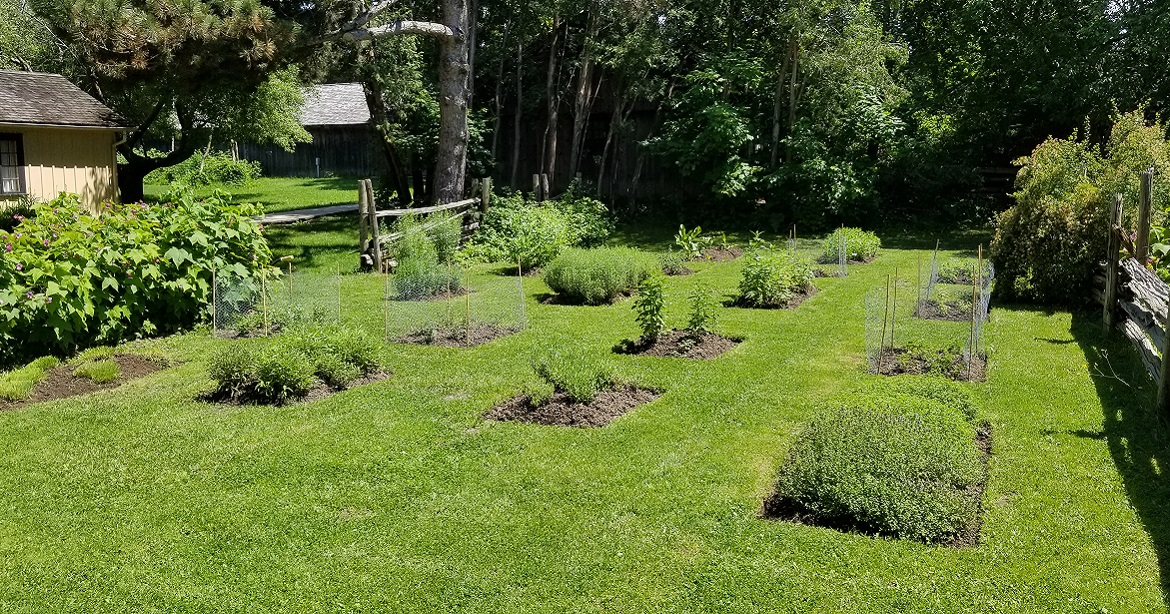 The herb garden at The Village between the Harness Shop and Laskay Emporium. Select images to view full-sized.

Annual Plant
An annual plant is one that completes an entire life cycle in one growing season. Once it dies back it will not re-emerge.

A similar category is a biennial plant, which germinates in one growing season and then flowers the following year. After it flowers it dies and will not re-emerge.

Perennial Plant
A perennial plant is one that returns year after year. Some perennials die back to the ground altogether, and new shoots emerge from the crown. Others are semi-evergreen and experience some annual tip die-back, or develop slightly woody stems over time. 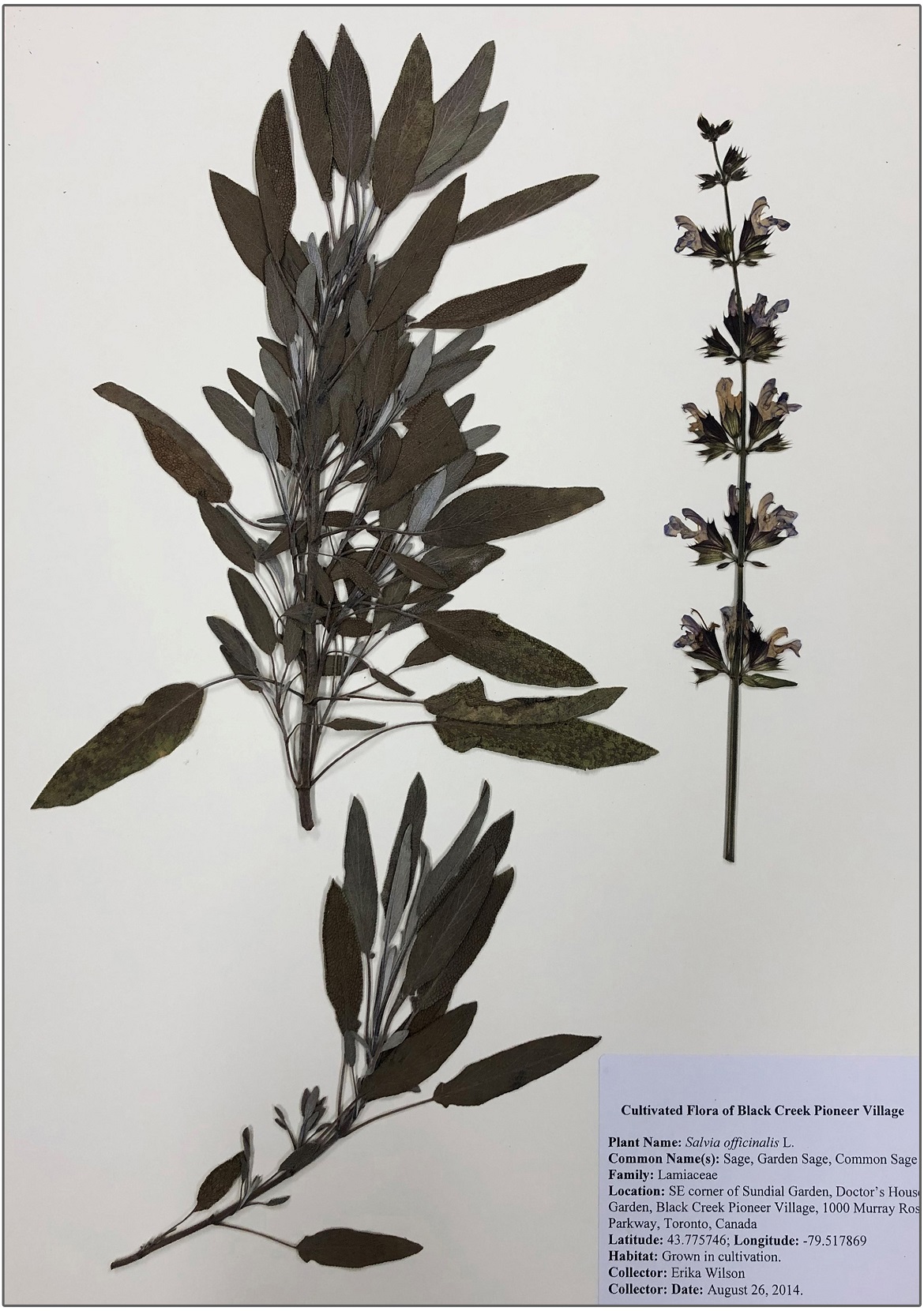 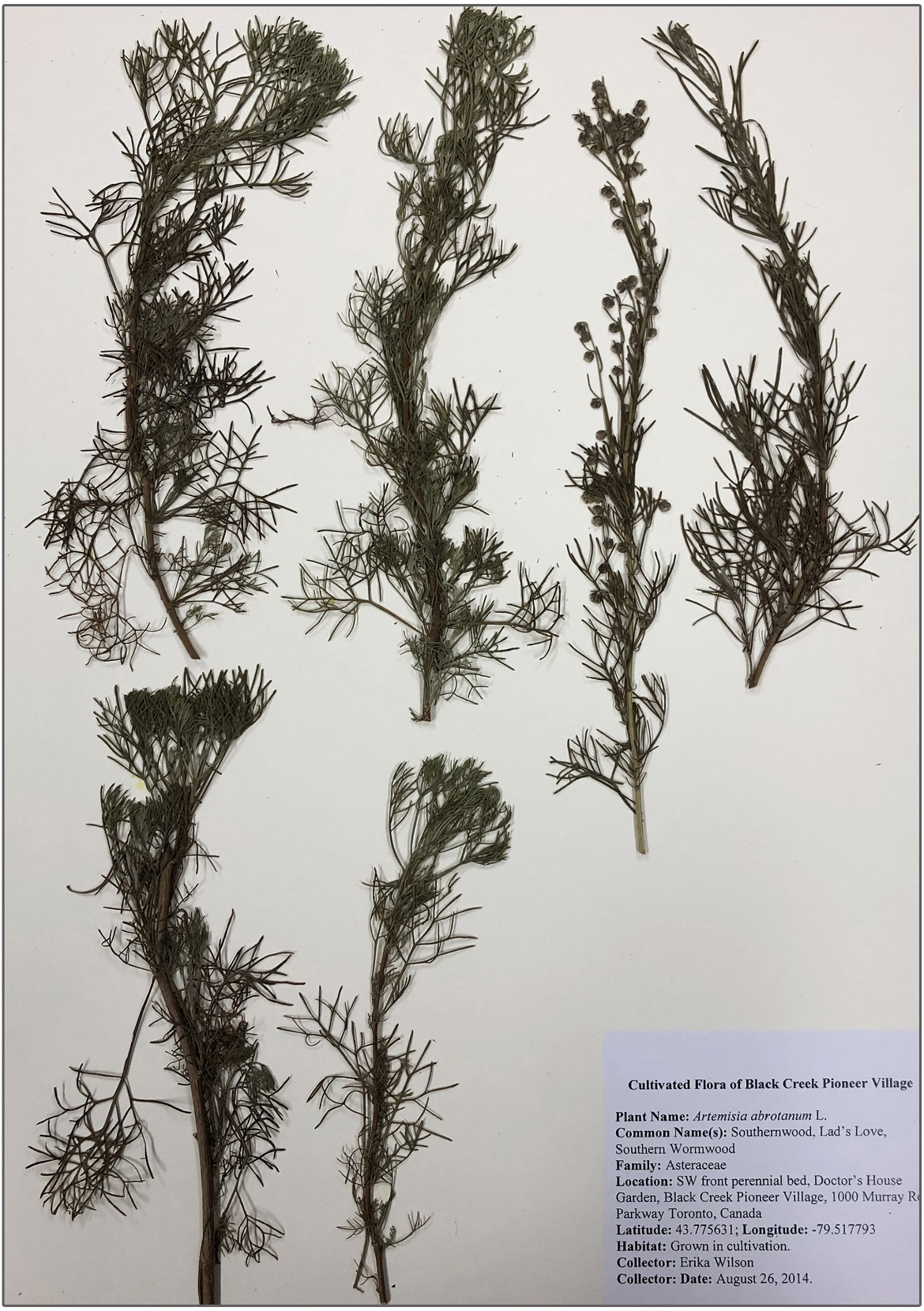 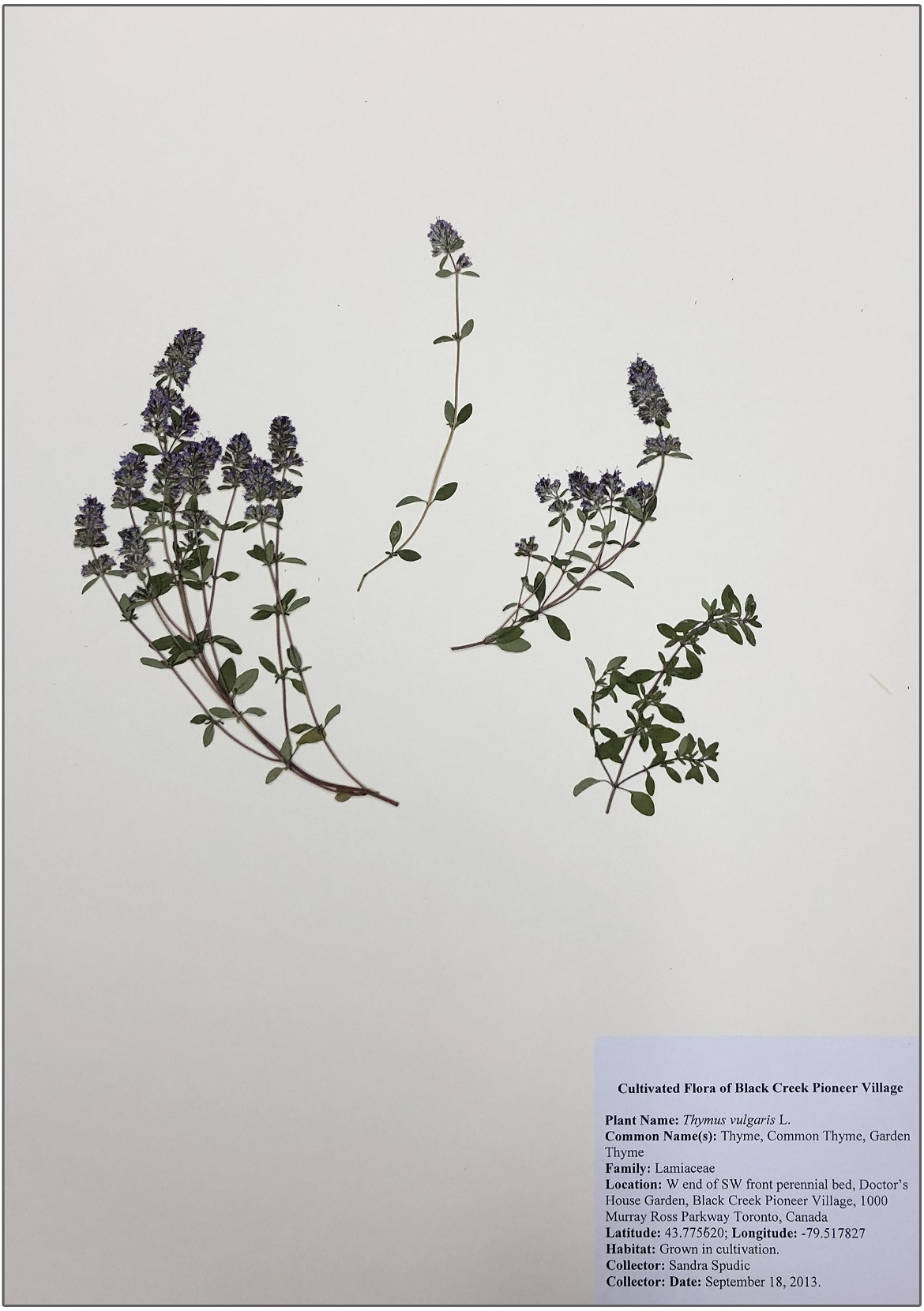 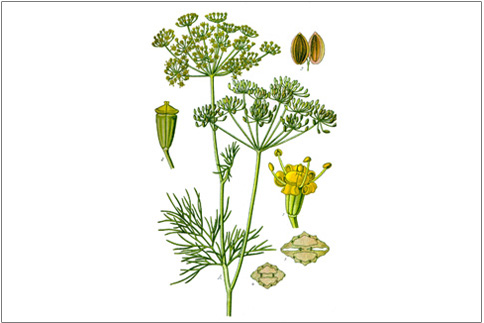 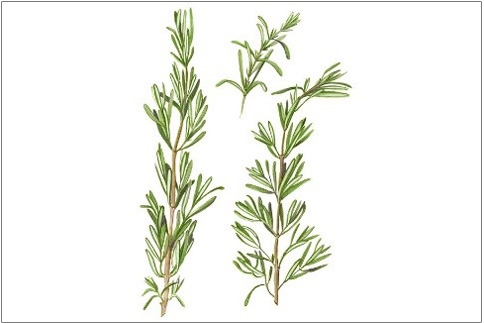 Most herbs have both culinary and medicinal uses, and come from plants that may be used both for their leaves (as herbs) and for their seeds (as spices).

Culinary herbs are aromatic, edible plants used in small amounts to add flavour to dishes. These include thyme, marjoram, winter savory, and sage.

Their clean scents made these herbs desirable: anything that smelled clean was thought to promote good health.

Medicinal herbs have been used in healing traditions around the world from the earliest beginnings of humankind. When Europeans and other newcomers arrived in Canada, they quickly learned about and adopted many of the plant medicines used by Indigenous peoples.

Medicinal plants contain a range of diverse organic compounds that vary depending on the life cycle stage and genetic makeup of the plant, as well as on environmental issues such as weather or proximity to other plants growing nearby.

The specific compounds may interact in different ways to produce therapeutic effects. Sometimes, simply breathing in a plant’s scent can be healing!

Want to start your own herb garden? Follow the instructions in our Get Hands-on at Home tutorial to create a container herb garden at home! 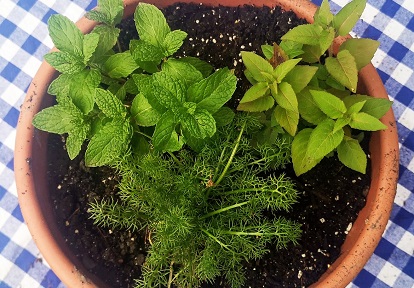