Pick Up an Old Skill!

At the DIY Heritage Trades Workshop, visitors to Black Creek Pioneer Village are invited to learn the basics of a trade or craft that was popular in the 19th century, and can even make an item to take home.

Find out more about the 19th century trades we highlight at our Workshop:

FOR EDUCATORS: Explore our online learning resources on heritage trades.

FOR FAMILIES: Check out a selection of at-home, hands-on activities based on heritage trades and crafts. 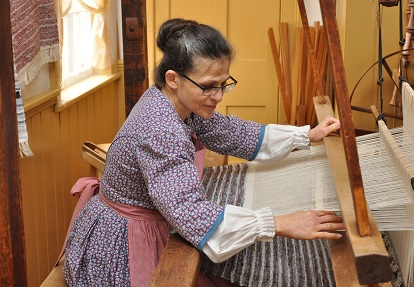 ALL ABOUT THE TRADES 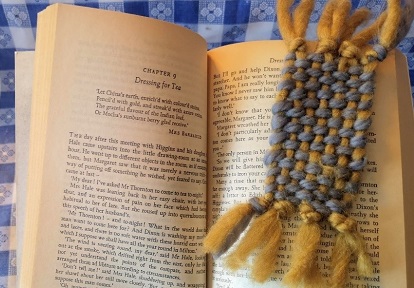 GET HANDS-ON AT HOME 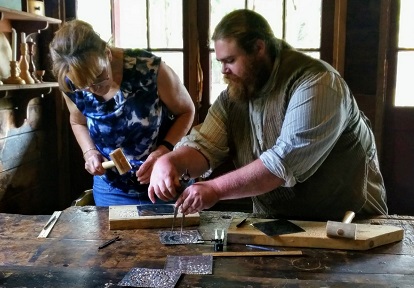 A tinsmith is a person who makes or repairs articles of tin or tinplate. Tinsmithing was a popular trade in the 19th century, as it did not require the use of a forge or as many tools as blacksmithing.

Sheets of tinplate were created by skilled craftsmen, who would dip thin iron or steel in hot molten tin, creating a tin coating on the metal. The tin would keep the thin metal sheets from rusting, while the iron or steel centre would make it strong.

The result was a durable, flexible material that could easily be made into items for use throughout the home. The tinsmith might also use brass or copper to make housewares.

The photograph below shows the kitchen of Burwick House at Black Creek Pioneer Village. How many items can you spot that are made by a tinsmith? What would these items be made of today? 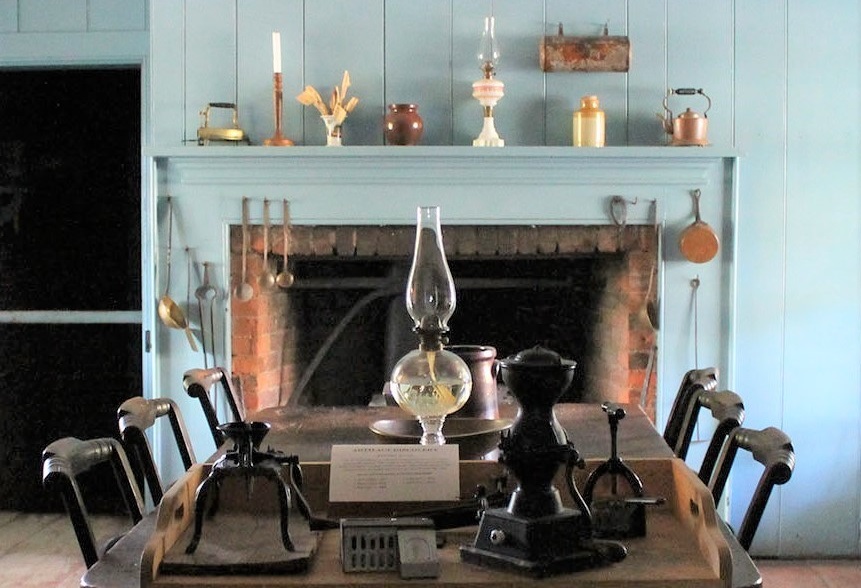 Highlight the text box to reveal the answers!

In the 19th century, the first hand-powered machine for cutting tin forms was invented. Before this advance, each piece of tinware was formed by hand.

Tinsmiths had three ways of making a living:

Tinsmithing was affected by the industrial revolution. Factories began to mass-produce items that had previously been made by artisans, and tinsmiths were forced to adapt.

Our Tinsmith Shop at Black Creek Pioneer Village, built in 1840 by Charles Shaw in Burwick (now Woodbridge, ON), expanded to become a hardware store in the later years of the 19th century.

DID YOU KNOW? Tinware was so popular in the second half of the 1800s that some tinsmiths made their living as tinkers, travelling from town to town mending broken items. The tinker carried the tools of his trade in a box known as a “tinker’s pig” (see illustration above).

For centuries, people have been working with leather for a variety of purposes, from clothing to controlling horses, and even for cooking pots. The Indigenous peoples living in what is now Ontario primarily used buckskin (deer hide) to create tools, clothing, and footwear for thousands of years.

Until the mid-1800s, leather had been stitched by hand by saddlers, cobblers, glovers, and other leatherworkers — but the arrival of the sewing machine sped up the manufacturing process considerably.

Still, when it came to stitching the leather, a craftsman endeavoured to produce a precise and appealing effect known in the trade as a “finish”, which reflected skill, knowledge of material, and pride of the craft.

Mastering the skills to produce quality leather products, such as saddles and harnesses for horses, required a lengthy apprenticeship that usually began around the age of 13.

Apprentices began their training in stitching by producing the thread that a shop would use, often made from flax or hemp coated with beeswax.

Today we still have clothes, shoes, belts, and handbags all made from leather. Most of these are made by machine — but there is a growing number of artisans who still make beautiful pieces in leather, stitched entirely by hand!

DID YOU KNOW? Saddles are still made by hand today, using virtually the same tools that were used two centuries ago!

Although the origins of rug hooking are unclear, it has been around for centuries.

The skill was first introduced to North America via New England, Quebec, and the Atlantic provinces in the early 19th century, where it is considered to be one of North America’s native folk art forms.

Floor coverings were a luxury in Canada at that time. Upper-class households had factory-produced carpets, while working class households made hooked rugs using old grain bags and scraps of worn clothing.

Traditional rug hooking is an art form in which rugs are made by pulling loops of yarn or fabric through a stiff woven base such as burlap or linen. The loops are pulled through the backing material by use of a crochet hook mounted in a handle for leverage.

The use of an embroidery hoop facilitated the development of hooking. Domestic rug hookers developed techniques and enhancements characteristic of their regions, which resulted in a variety of distinctive styles.

DID YOU KNOW? The oldest known hooked rug in Canada was designed by 16-year-old Susanna Smith and constructed by her 13-year old sister, Abigail, in 1860 at New Maryland, New Brunswick.

ACTIVITY: Waste Not, Want Not

Rug hooking was an inexpensive way to use materials in the home to make something useful!

While in the past this practice was all about saving money, today we know that finding a creative way to reuse old items is a great way to help the environment.

Your challenge: Find three items that you would have thrown away, and make them into something else!

Check out this hands-on activity for a creative way to reuse empty toilet paper rolls!

What else can you come up with?

The innovations of 19th century printing make it one of the liveliest periods in the history of Western printmaking.

Prints are defined as works of art made in multiples by pressing an inked block or plate bearing a design onto a support, typically paper.

The advent of new techniques in the 19th century was instrumental for society — not only were new subjects and styles for illustrations created, but it increased the ability to produce large quantities of work quickly, which had a profound impact on type.

The iron printing press, first created in 1798, not only allowed more pages to be printed at one time — it also lasted longer than the previous wooden presses.

As mechanization improved, wooden parts were replaced with metal. With the introduction of steam power to cylindrical printing, the possibilities of what could be produced seemed endless!

A noteworthy innovation in the latter part of the 19th century was the offset press, also called offset lithography, which was particularly valuable for colour printing.

These new technologies led to a wider distribution of materials, including books, magazines, and newspapers. As a result, print became more affordable and accessible to the working class.

DID YOU KNOW? Women printers were often given tedious tasks that offered little possibility for advancement in the press shop. They fed sheets onto and off the press. In the type foundry, women were either “rubbers”, who completed the final finish on type, or packagers of type.

ACTIVITY: Make your own Potato Stamp!

Try printing at home! Create your own engraving in a potato and use it to make colourful patterns and prints. Check out the tutorial.

FOR DISCUSSION:
What Jobs Exist Today That Might Change With Evolving Technology?

Many 19th century artisan jobs still exist today, due to the continued demand for and appreciation of quality craftsmanship and artistry.

However, as technology continues to evolve, jobs that do not involve authentic creativity or the building of in-depth relationships with people will likely be replaced by automation in the future.

What jobs can you think of that are prevalent today but might not be around in 10 to 20 years?

DIY Heritage Trade Workshops at Black Creek Pioneer Village are offered on a drop-in basis throughout the season.

The Workshop is located in the Dominion Carriageworks building, which was built in the 1860s in Sebringville Ontario.

At the Workshop, visitors enjoy the opportunity to learn basic heritage trades and crafts.

Participants can make a pierced tin ornament, sew a leather pouch, learn to rug hook, or create a personalized poster on a 19th century artifact press.

There is a nominal $5 fee to cover the cost of materials.

Please check back soon for upcoming program times and topics!

A Note for Families:

Since the workshops use the actual materials and tools associated with these trades, they are not suitable for children under nine years of age.

Should you wish to participate as a family, please consult with the workshop facilitator. Children ages 13 and under must be accompanied by an adult.

Closed-toe shoes must be worn when piercing tin, and are strongly recommended for all other trades workshops.